The motto is derived from Paul’s letter to the Ephesians:

“So stand ready, with truth as a belt tight around your waste, with righteousness as your breastplate, and as your shoes the readiness to announce the Good News of peace. At all times carry faith as a shield; for with it you will be able to put out all the burning arrows shot by the Evil One.” 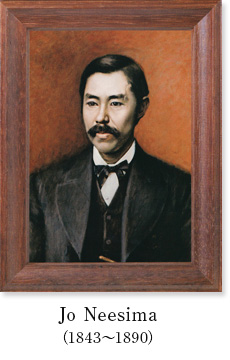 Jo Neesima was born as a son of a samurai from Annaka in 1843. During his childhood, Neesima came in contact with Western culture. He secretly left Japan from Hakodate in 1864 and studied in the United States for ten years.

After his return to Japan, he advocated character-building education based on Christian principles and founded Doshisha English School to train young people to serve others and God. What he hoped for the students was the following: “If a person has a genuine heart, freedom will garner discipline, and independence will naturally lead to order; that is having sound judgment. The person will not be morally ashamed of oneself before God or man, and will use one’s abilities to sculpt their destiny.”

The Department of Career Design

The curriculum of the Department of Career Design is customized by the individual student. Of the more than 140 courses offered, only 10 are required. These “core courses” acquaint the student with fundamental skills necessary to succeed in contemporary society, deepen knowledge, and nurture curiosity. Elective courses are open to all students. The student can opt to select various courses from a broad spectrum of academic disciplines or focus on one or two. Each student personalizes a curriculum that best suits her present and future needs.

Five Strengths of the Department of Career Design

Students freely select courses and “design” their own unique curriculum.

Due to its small size, the department’s faculty and staff are friendly, accessible, and approachable.

Students wishing to relearn the fundamentals can do so. Also, seminar faculty and the Career Center offer support with finding employment and transferring to four-year universities.

Students wishing to reconsider their lives and careers can acquire alternate strategies and new ways of thinking.

Four courses tailored to the needs of today’s students

The Department of Career Design consists of four courses so that students can choose the course of study that best fits their needs.

Chart a course and begin to realize career goals.

Find a job that suits your ambitions.

Acquire the necessary knowledge and qualifications to become a contributing member of society.

Find a job that makes the most of your language skills.

Find work in an international environment.

The Department of Community Child Studies

The Department of Community Child Studies enables students to accurately grasp the child-rearing situation in the community and acquire the necessary knowledge and practical skills for a career in Early Childhood Education and Care. By providing students with opportunities to learn and interact with people in the community, the department aims to develop childcare professionals who will cherish each child as well as be the core of child-rearing in the community.
Students can obtain a kindergarten teaching credential and a nursery teacher license after graduation.